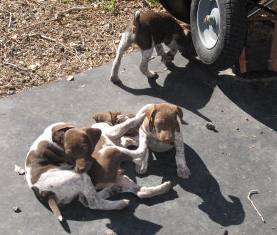 This was our first breeding of Outlanders Crystal Image-Honor. We planned these pups to be highly trainable with high bird and water drive. Both Honor and Cooper come from long lines of foot hunting NAVHDA tested and bred dogs. Both Cooper and Honor are OFA Excellent. They were also both very easy to train. Steadiness took a handful of sessions for both as well as the retrieve. Cooper was never tested in the NAVHDA system as his owner is not involved in the organization. However, his mother is the dam of several UT PZ I dogs and 2 Versatile Champions. The NAVHDA Versatile Champions are both littermates to Cooper. His mother is a littermate to my foundation bitch, Mazzy. She (Emmy) died unexpectedly from complications of her spaying after only two litters. She was a great loss to the breed.

Cooper has an incredible nose with a natural back (honor) that is often over 50 yards away. Many people have commented that he is a “carbon copy” in style and appearance to the great Hillhaven’s Hustler. He is a medium running dog that will adjust his range to the type of cover you are hunting in. When he makes scent he becomes very cautious and works the game carefully so the hunter has the best chance to shoot the bird. Cooper is the sire of many titled AKC Hunt test dogs. He also has extremely correct conformation. He could easily have obtained his AKC show championship. He is a one of a kind dog and has proven his ability to pass his greatness on to his puppies.

Honor is THE smartest wild bird dog I have ever hunted over. She never saw the glory days of wild pheasants on public lands. She learned from wild roosters that tracking in the usual style was not going to get the bird. She devised her own way of literally pinning even older roosters (big old spurs!) between the hunter and her. It is an incredible sight to see and 9 out of 10 of our birds are shot over Honor every trip. She is the dog you pull out of the truck when the field is full of burrs, thick cover, stickers or huge territory to cover as she NEVER quits, no matter what. She will run her heart out and is the hardest working (seriously!!) dog I have ever, ever known. She was also one of those rare natural duck search dogs. I never had to train her duck search. I simply showed her that ducks were “out there” and she never looked back. I ran her in the 2012 Invitational. She got all passing scores except a 2 in backing. She does back naturally, it just wasn’t the “style” they were looking for. I may run her again in 2014. She is a joy to live with and one of the sweetest dogs I have ever known. There is just something about Honor that is pure and loving.

This was a line-breeding. Cooper and Honor’s mothers are littermates: Emmy and Mazzy. Both Emmy and Mazzy were outstanding producers, each producing numerous Master Hunters, Utility Prize I dogs and Versatile Champions with only 5 litters between them. Because this is such a close line breeding the consistency between puppies in this litter was truly remarkable. Their new owners are very happy with these dogs as house dogs and as hunting dogs.

"Outlanders Made of Honor"