This breeding of Outlanders Made of Honor (Matey) our Honor daughter was her second breeding. She is stellar as a hunting dog. She has proven herself a great wild bird dog and waterfowl dog. From Montana Sharptail, Hun, and Pheasant…to Wyoming ducks, geese, pheasant, chukar, hun and pheasant. She is a natural backer, her search is as big or small as the field and birds dictate, she absolutely loves water, and has a beautiful and intense style on point…plus she will track a wounded bird as long as it takes showing a concentration and dedication to the scent that I have rarely seen. It is interesting that she has become my number one tracker as she did not do it as a young dog in her Natural Ability test. All 4’s (highest score) in everything else though. She is an easy traveler and great house dog. 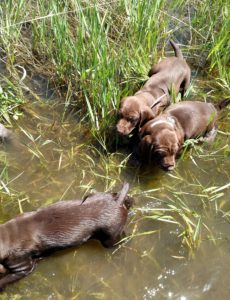 For our P litter, Matey was bred to FC/AFC Red Oak’s Dez, SH. Dez is a VC Jacob vd Westwind, MH son out of Sundance Penny who is, herself, a Jacob grand-daughter. Dez’s litter was conceived long after the death of Jacob using frozen semen. My first GSP was VC Indian Brooks Espresso, MH (Mazzy). She was also a daughter of Jacob and she is the grandmother of Matey. This is why I am doing this breeding. To get myself another “little brown dog.” Speaking to Andy Cooper, Dez’s owner, Dez is a very cooperative and easy to train dog. He also covers ground. Lots of ground, but always keeps you in sight. This was how Mazzy was. Though Jacob was not known to produce “dogs with wheels” there were the occasional ones, and Dez and Mazzy HAD those wheels. Neither one tends to produce as big of a run as they themselves had, but that drive to hunt and find birds…and hold them on point when they find them, is what I am looking for…again. I am keeping the pick female from this litter as it is a breeding that should/could produce the kind of old time hunting German Shorthaired Pointer most of us desire. A strong, fast, cooperative, high drive, high desire, good work ethic shorthair. Though Dez was not tested in NAVHDA past his Natural Ability test, he is an accomplished test dog earning an AKC Senior Hunter and his Field Trial Championships. He also loves ducks and water.

All puppies are sold from this litter.